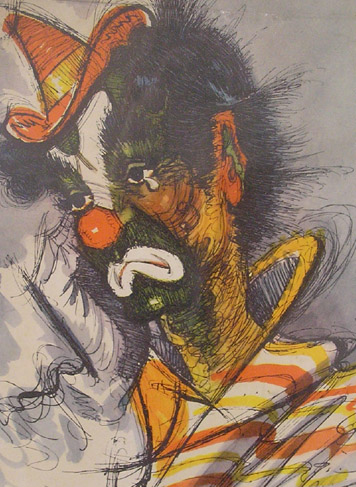 Fundamentally Mick and Pat are representational drawings, the classic “comedy and tragedy” masks established by Greek theater, reinterpreted through the scruffy countenance of two “hobo” clowns. Yet elements of the pieces suggest the work of the Italian Futurist movement, and the two pieces cannot be taken entirely literally.

The Futurists were a movement that predicted the Cubists. Mick/Pat most strongly echoes the work of Carlo Carrà, one of the founders of the Futurist movement, who merges explosions of rough angles and spirals with an organic and sketched style that strengthens the sense of motion and immediacy of his work. The strange and severe clothing of the two clowns reflects the style of Carrà and the early Futurists. While it could not be said that these two pieces are Futurist works, the ironic collision of that movement’s focus on motion and the triumph of tomorrow over the irrelevant past deepens the role of clown—happy or sad—as the authorized outsider, a figure that transcends social norms to become the archetypal trickster.