In Klaatu, a visitor from space leaves his vessel, bringing a message to our world. The nature of his message is unclear, nine abstract symbols on a clay tablet that cannot be read—spirals, water-like swirls, slashes, dots, and crosses—the basic building blocks of writing and imagery, but ultimately we have no Rosetta stone to translate these symbols. To contextualize this image at all, we must make a number of surface assumptions: that the alien has landed on our earth; that the strange construct behind it is a ship—it seems to have a window, a nose cone, and supporting fins. That there is any attempt to communicate between alien and audience. Ultimately, though, like the strange glyphs on the tablet, both artistic concept and alien message are oblique, unclear—and if we attempt to read anything into the facial expression of the alien, the attempt to transmit meaning is, in itself, an exercise in frustration.

Our initial assumptions of Klaatu can blind us to other lenses. The organic spire of the alien’s vessel, white stone at its base, more resembles a mountain than a rocket. Another figure carried tablets from the mountain, a message that was not immediately received by the intended audience: Moses and the ten commandments. 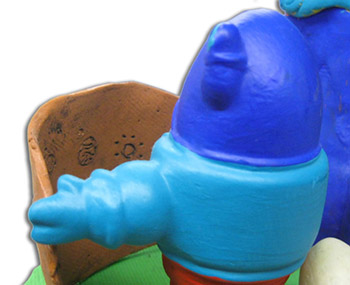 Fundamentally, the alien and the divine are both aspects of the numinous, mysterious and untranslatable. Likewise, artistic inspiration comes like a stormcloud around a mountain, and the artist’s attempt to translate it with crude tools of paint and canvas, tablet and stylus, pen and paper, can never capture the flash and thunder of the original. To appreciate art is to see inspiration many times removed, a message shared without a common language.