Age and youth? Father and son? Actors in a mystery play, the two subjects of Hair Beard, Beard Hair seamlessly transition into one another, forming an asymmetrical pair. Let the child, flush with health and rich in hair, represent the present and the future, for that is the role of youth, and let the parent be the past, for as always the parent leaves the stage to give the child their time in the spotlight.

In the case of Hair Beard, Beard Hair, the parent—and the past—is 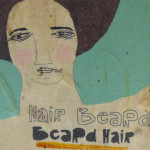 complete and whole, it stands alone without the child, the elder might have a strange forking cleft in his facial hair, but would still be an intact character. Without the elder, the child would be a strange, bald creature, incomplete and alien. In the play that is Hair Beard, the past is immutable, complete, its story is told and can be known. But the future cannot exist without reference to the past, and can never be understood.