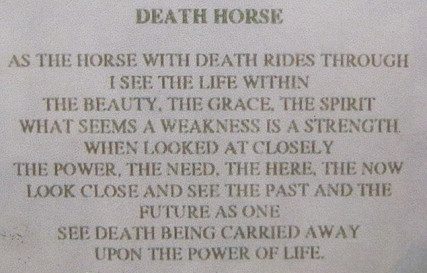 In most instances of thrift store art, the audience is left in puzzlement, bemusedly scratching their heads as they try to discern the meaning behind a given painting, drawing, or pasta mosaic. Death Horse is unique in that the artist explains her intent in free verse, and instead, we are left puzzling over a short piece of poetry. This has not made critical interpretation of Death Horse easier.  We have included the poem as we received it; your guess is as good as ours.

The macabre distorted figure of Death rides forth from a planet-sized floating eyeballclock, at such a great speed that flames spread in his wake (this is presumably friction generated by re-entry). The horse is as grim as his rider, Lee’s poetry notwithstanding, his face is withered and decayed. Strangely, there are signs of both life and, indeed, festivity in this unsettling image; a heart beats within Death’s bony chest, and he wears a rather fun rainbow-inlaid cowl, and his tack and saddle  is whimsically covered in sequins and cute little golden bells. Wherever the pale rider goes this night, it’s sure to be a party!

Perhaps the core of this image is, in fact, one of perception. The eye, the clock, are the same image. We see, literally, through time. Our perceptions of Death are lensed by our mortality. If we were able to see Death as he would want to be seen—certainly, he is bony, armed with a scythe, and is on fire, but does he not have a heart? Yes, the horse may be rotting, but can’t you see the little beads in its mane? Look beyond the grave to the glamour beyond. Death, when he comes, shall be dread in his aspect and fabulous in his accessories: the viewer, perspective suddenly divorced from the lens of mortality, sees Death in both of these aspects.