Inspired by the dark and bleak romanticism of Francesco Goya, Portrait of the Artist as Marilyn Manson renders the artist in such an abstract, attenuated manner that his dog seems more approachable and human. The degree to which the complete painting draws attention away from the artist is startling: the staircase is a threatening red. Its harsh angles seem to pull it completely out of the plane of the subject, existing as more a threatening force at the edge of the audience’s field of view than an architectural feature. The subjects pose makes the stairs still more alien, they seem to cling to him like fire, or like the ridges of some strange antediluvian reptile.

Contrast the subject to the background he reclines against or perhaps leans on, or to his dog: the subject’s features are washed out, running like mascara against his pale skin. Even his clothing is barely distinguished from his body, and in places it is the same gray tone as his flesh. Without the shockingly bright contrast of the background or the solid reality of the dog, the subject himself may well fade into the canvas, scarcely more solid than a mist. The overall tone of the Portrait is one of faint accusation: How can you hope to understand me, whispers the subject, when you’re looking at the stairs? 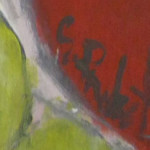 While TAMONNATAOA’s friends in the art historian community have not verified this theory, because Portrait was donated to the museum directly by the artist’s mother when TAMONNATAOA collected the von Buda gallery in 2010-2012, we believe that the subject of Portrait is Nichodemus Von Buda himself, and Portrait is either a self-portrait or a commissioned work. Either way, Portrait, is a significant piece within both the von Buda collection and the Museum itself, and is often called simply “The Buda” by our staff and volunteers.