Few things evoke as powerful an emotional response as a human infant. The artist Aum’s use of putti molds in (Ceremonial Vase), combined with the blue and gray color palate of the vase, render the commonplace alien: the infant faces seem to rise from a ceramic prison, distorted and trapped. One near the prominent ventral curve of the vase has a hole drilled or molded into its forehead, as if he had been the victim of trepanation or some dreadful surgical procedure. 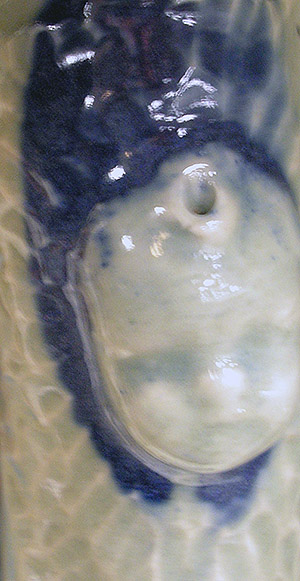 The colors of (Ceremonial Vase) are homey, the blue, gray, and white of delftware china. The heart shape etched into the front of the piece clearly is intended to foster that tiny note of domestic warmth that is the central conflict of (Ceremonial Vase),  the thread of normalcy that snaps under the weight of the molded baby faces and strange, tapered base. The clean white becomes a sickly gray, the children’s faces not a pure color but the strange, waxy finish of a death mask.