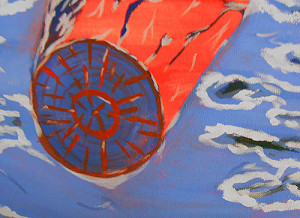 The tradition of apocalyptic storytelling and art reaches back in time to as far back as the Jewish diaspora and Teutonic myth cycles, if not before. However, it is only in the past few decades that science can legitimize doomsday scenarios, adding fire (figuratively and literally) to this ancient tradition.

In (Cataclysm) fire, water, science and speculation come together in a powerful image of annihilation. A massive object—perhaps a stylized asteroid, perhaps something more alien—breaches the planet’s atmosphere and plunges into the water. Powerful waves, suggested by the undulating shape of the water/land border itself and the rippling, almost luminescent, surface of the water, rise up. The land itself is distorted into curves, and the sun has become a great fireball: the edges of its corona seem to destroy the land, as if that star itself has come to earth and consumes the land. The overall effect of the piece is chaos and turmoil, both earth and sea shaking under powerful forces.

The nature of the meteor itself is uncertain. It may simply be a massive stone, a piece of cosmic debris, and the stylized nature of outsider art leaves that option open. Its spherical shape may allude to its created origin, a flying, or crashing, saucer. Yet its details resemble also the hands of a clock, suggesting inevitability and the cyclic nature of time (has this happened before, and will it happen again?) and as well a great eye, its raw nerves suggested by a fiery trail. In that light, the image becomes an angry commentary on the conflict of ideas between an arbitrary universe and a compassionate creator. How can a being watch the confused and chaotic world, and still remain neutral?